My wife and 10-year-old son just drew a picture together. No big deal, right?
He was drawing on a whiteboard in Presidio’s Newport Beach office.
She was drawing on her iPhone SE in the backseat of a car crossing the dusty no-man’s-land between California and Arizona.
Oh, and they were laughing and seeing each other in-app the whole time.
(My mother-in-law joined in on the laughter, too.)
But wait. There’s more.
There was no planning and zero training for this. They opened an app and just started using it.
How is this possible, you say?
We use Cisco Spark. It’s that simple.
Here’s how it happened.
I brought my son to work. It was going to be a fun day since we were installing Presidio’s Newport Beach Spark Board, and I wanted him to experience it. (Full disclosure: We played hooky for this.)
We walked in and and the board was on the wall asking for a 16-digit code, which I read aloud. My son typed in the code and hit the checkmark, figured out what time zone we were in and hit another checkmark, then hit a checkmark one last time to register.
(You read that right: a 10-year-old set up the Presidio Spark Board. It’s that easy.) 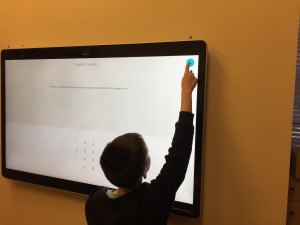 Less than a minute later, the Spark Board was up and running. A few minutes after that, it grabbed a newer version of code and upgraded itself. (Each upgrade took about 2 minutes, and it’s upgraded a total of four times since I had one of the first boards off the manufacturing floor.) We were ready.
On my iPhone, I opened the Spark space I use to keep in touch with my family. Yes, my wife, son, parents, brothers and in-laws are all in a “Miller Family” team in Spark. We have several “spaces” for different topics (Healthy Encouragement, Recipes, Harry Potter book club, etc.). For this conversation, I opened the general discussion space and within seconds had access to all the files in the space.
Best of all: I could whiteboard with everyone, and everyone could see and edit the whiteboard.
In real time.
From any device.
From there, my son grabbed the Spark Board pen, and he was off to the races. So my wife could experience what he was drawing (a vampire cowboy), I tapped the whiteboard twice to open a call for everyone in the space. My brother joined from his car, then my wife joined, then my mother-in-law. The party was on within seconds. 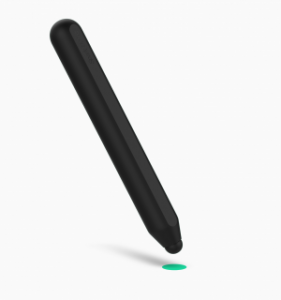 By tapping “Share live” on the whiteboard, I was then able to push the whiteboard to everyone’s device (Android phone for my brother, iPhone SE for my wife and mother-in-law). They saw my son drawing live as he worked away on his masterpiece.
Once the vampire cowboy was completed… 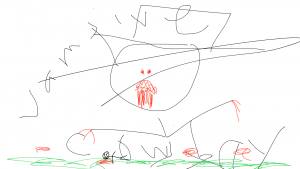 …my son opened a new whiteboard and started sketching a building and nukes.
My wife (who had quietly itched to make the vampire cowboy fall in love) could no longer contain herself from balancing out the apocalyptic art theme. With one tap, she went from watching to editing the whiteboard. She drew daisies on the left while he drew nukes on the right. 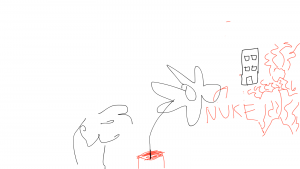 Nukes on the right, daisies on the left = balance in the world?

If any of you have ever had kids to the office and they’ve drawn on the whiteboard, you’ve had to take pictures to preserve the memory. Not any more!  We left the office, and the drawings live on in the Spark space — still available to be continued at any time, by anyone in the space, on any device.
After a life spent in technology, I’ve come to think of technology as more of a barrier to creativity than an enabler.  It is often too complex, too cumbersome, and simply gets in the way of the creative process.  Spark changed that for me, not just because of the Spark Board, but because of the intuitive whiteboarding capability Cisco has infused into every Spark app. You don’t need a Spark Board to whiteboard with teammates anywhere, any time, and on any device.  It just makes it a LOT more fun.
I’m really excited about Spark and the Spark Board. For those who have been using Spark already, it is a natural extension of the app. For those who have been missing out on Cisco Spark, it’s time to jump in! If you’d like a demo of the Spark Board, reach out and I’d be happy to show it off to you! If you want a free account in Cisco Spark, sign up here, and hit me up in-app at jomiller@presidio.com.

Yah, that’s what I would have thought a few years ago as well.

As the ASA is embedded in the path of my solutions more and more (aka borderless concerns) I’m finding that it is crucial to understand and be able to verify licensing on customer ASA’s.

This is true not just in the most common scenarios – ASA handling secure connectivity for a user at their house who is running any of the variety of teleworker scenarios (IP Communicator/other softphone over VPN, ASA/8xx router with fixed VPN, IP Phone with Phone Proxy, or IP Phone with VPN) but other up and coming scenarios such as IME, and IM/XMPP federation.

The ASA truly is becoming an integral device to the overall architecture to common UC deployments (not just the one you have up there for the security conscious customers).

All that said, I’ve quoted ASA licensing several times, and advised customers numerous times but I felt I had some gaps – so I sat in on an ASA Licensing training.

What is below is not a comprehensive view of ASA licensing, but rather a focus on the most common discussion points for ASA Licensing from a UC view.

First – there are four scenarios for remote employees that I mentioned above:

Below is a bit more detail on each of the options, along with information on the licenses required.

This option is historically the most common scenario.  Softphone client options are:

The solution is very flexible – VPN anyway possible to the corporate network, and you have a phone client operational.

VPN licensing can pretty much be any VPN option – SSL VPN, IPSec, etc.

This scenario was pretty common and is still around, but is being phased out for options that don’t require hardware at the home/small office.

Again, this solution was flexible from a VPN selection perspective – use whatever needed to provide the proper security, and keep the tunnel up and running as long as desired.

While I only had two customers actually use the original Metreos “Phone Proxy” appliance, Cisco did a good job of cleaning up the issues with the original rendition, and moving the code/functionality to a pretty ubiquitous platform in the ASA.

The premise is great – drop nearly any Cisco IP Phone somewhere on the Internet, plug it into a local power brick, and you are off and running.

Unfortunately, there a couple of major issues with the Phone Proxy option:

That’s the last time I’m going to use the old term of SSL VPN.  I’m on the bandwagon – AnyConnect it is!

This is my personal favorite option – mainly because getting the AnyConnect infrastructure in place helps not just for remote phones, it helps for mobile devices, remote phones, remote PC/Mac’s…basically everything!

The AnyConnect Premium license is based on the number of CONCURRENT sessions.

There is even better scenarios where you can pool licenses on a single ASA, and have other ASA around the world or country grab licenses in blocks of 50 on an as needed basis.

The AnyConnect for Cisco VPN Phone licenses is per PLATFORM – throw it on the ASA and you are set.  These licenses are cheap – $100-500 based on the platform.

While you are at it, thrown in the AnyConnect for Mobile (L-ASA-AC-M-55XX) as well so you can have iPhones/iPads/Android devices (see my tweet from 10-28 btw) connect using AnyConnect.  That license is roughly the same as the AnyConnect for Cisco VPN Phone’s cost.

There are a couple big wins for this option in my book:

One last note for this option – it requires 8.0.4+ version of ASA code.

That’s all for now, I’ll address IME and the Federation discussion later…or not…

–1 Port of WebEx MeetingCenter for all 10 Pro users

Rumor has it, customers who have purchased as recently as May of 2011 are eligible to grab the freebies.

MeetingPlace is also changing again – away from the User Connect Model and back to a “buy license here, another one there, and sometimes that one too” model.

The changes to CUWL are great and needed, however I see confusion coming on how they are going to be implemented.

Here are some of the questions I have to start:

I’ll be tracking down these and more answers, and will update the post as more details are fleshed out…